It’s been a while since I decided to get a new laptop and, finally, the replacement to my MacBook Pro mid-2014 came in the mail last Monday (April 21st, 2020). The selected laptop has been a Lenovo ThinkPad T490s, and I decided to use it entirely with Linux.

In this post I will link some power management tweaks and explain them, as well as some other tips and resources, and analyse how this laptop battery performs using Ubuntu 20.04.

The battery life of this integrated GPU laptop can comfortably last a whole 9 to 5 day for a developer-like job, with CPU demand peaks here and there, like building binaries and running automated tests. That kind of usage also includes browsing static documentation and not very fancy sites like Stack Overflow connected to a WiFi, and streaming music to a bluetooth headset to get in the flow.

When it comes to browser-based jobs, like online publishing or editing, the battery life can drop a bit but I still believe that it can make the day if we are not too much into graphics and animation-oriented web publishing.

We have to be careful about the choices we make with regards to the browser we use, and take some precautions against parasitic browser code like tracking and advertising. These things are draining our battery and making our laptop work for someone else, and that’s definitely something to avoid.

Hardware and OS in Brief

This laptop has the following configuration:

Here’s the neofetch output with the laptop totally idle, hence the 400MHz frequency for the processor (with turbos, pedal to the metal, and so, it can scale up to 4.8 GHz): 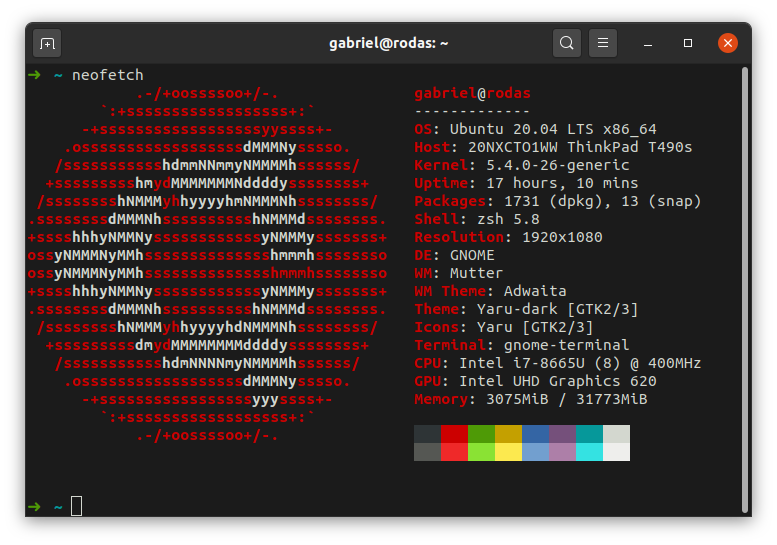 The laptop came with Windows 10 Pro, which is an operating system that I like. The reason I switched to Linux is the nature of my work with the laptop, which is more inclined towards Unix.

The initial configuration was a dual boot between elementary OS and Windows 10. After a week of not booting Windows more than for a few tests, and suffering some very annoying 3 year old bugs when connecting an external display to the laptop, I decided to change the layout of my disk to 100% Linux, switch to Ubuntu to avoid bugs, and no Windows.

Linux has evolved quite nicely when it comes to manage the power consumption of a laptop. The packages tlp and powertop give a lot of control over the energy management of modern computers, and some nice specific extensions for the ThinkPads.

Although out of the box those packages give a nice performance, it is recommended to tweak their configuration a little and the ThinkPad subreddit has a very useful wiki page with instructions to follow.

For my laptop, at the moment of writing this post, this is the scripted configuration I applied right after installing the system. It is just an automation over the aforementioned wiki, to most of its extent, only omiting the packages and modules that don’t work for this model.

You can find a bunch of scripts in one of my GitHub repos. They are not a software masterpiece, just automation to ease the set up of a new Linux installation.

After doing this, as my script-fu is not as good as needed to automate the patching of a file, I modified the tlp configuration by hand to apply the following:

That is, fundamentally, the energy configuration of my laptop.

I used the laptop for a total of 4 cycles, that is, an equivalent of 4 full discharges and charges back to 100%. One of them was a recalibration of the battery gauge, something that is supported by the hardware of the ThinkPads and that works at follows:

At that moment I left it alone, powered on and with the lid closed, and I just did other things. I suppose that you can use the laptop normally, though.

In Windows 10, battery gauge recalibration can be done with Lenovo Vantage.

I set up the brightness to 25% (comfortable for dark themes), connected my headset, and went on a battery ride. What I did was to run some scenarios for a number of minutes (2 to 5) in order to stabilize the measures by getting to a sort of “permanent regime”, and then check the power drain with sudo powertop in a terminal. With that drainage measured in Watts, I did some basic arithmetic with the battery total capacity (57 W nominal).

This ThinkPad has the following power behaviour on a battery:

The table in this section is just to give you an idea about the toll of a single scenario when the laptop has achieved “its flow” while doing it: programs loaded, caches are stable, memory has been allocated, and then the power regime gets stable. It doesn’t mean that you will stay within one of these scenarios for the whole day, because we jump from one to another. And also covers a very specific usage, developer oriented.

The first row is worth to mention. I come from using a MacBook Pro from mid-2014, and I remember being able to close the lid and have pretty much the same battery the next day, or maybe 1% or 2% less after a whole night suspended. That was possible for about 3 years, but not since Mojave due to (I suppose) Apple’s shift of attention to newer models. The ThinkPad T490s does a not so good 5% to 10%, depending on how much you sleep, and when did you close the lid the previous day. A point would be to be able to further research whether this is due to the laptop design or Linux’.

A few considerations about my blogging set up so you can compare it to some scenarios of yours. I use Jekyll to prepare a static blog that gets uploaded to GitHub Pages by means of git. Jekyll is a static webite framework written in Ruby, and it is based on the usage of Markdown. To edit, I use Visual Studio Code with a preview panel always there, and I have running bundle exec jekyll serve in the background. That rebuilds the whole site every time I save a Markdown file. That way I can check the posts on a browser that points to my machine. Here’s how it looks: 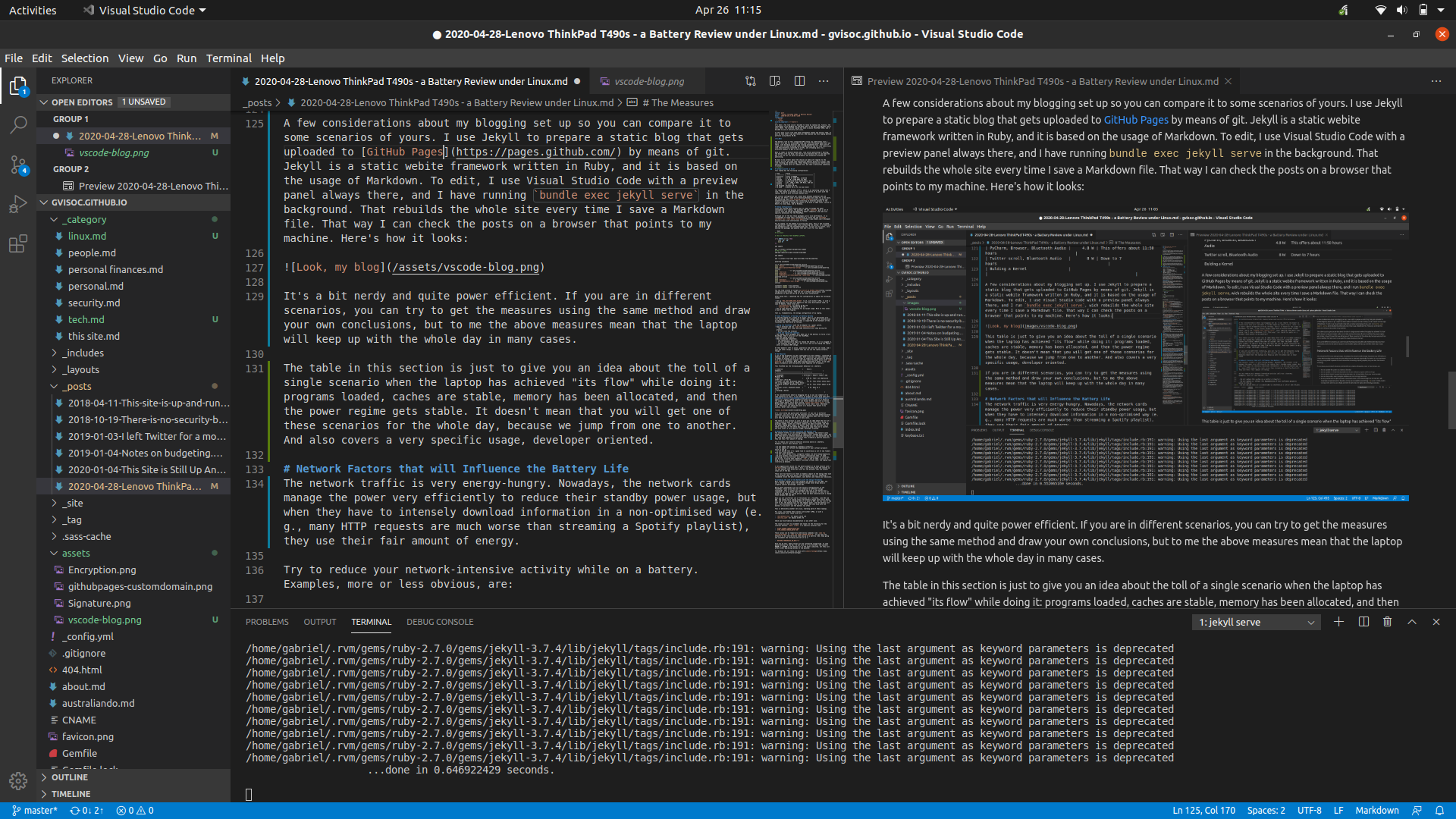 It’s a bit nerdy and quite power efficient.

If you are in different scenarios, you can try to get the measures using the same method and draw your own conclusions, but to me the above measures mean that the laptop will keep up with the whole day in many cases.

Network Factors that will Influence the Battery Life

The network traffic is very energy-hungry. Nowadays, the network cards manage the power very efficiently to reduce their standby power usage, but when they have to intensely download information in a non-optimised way (e.g., many HTTP requests are much worse than streaming a Spotify playlist), they use their fair amount of energy.

Try to reduce your network-intensive activity while on a battery. Examples, more or less obvious, are:

I very aggressively block all the advertisement at my home network with a Pi-hole. Also, I use Firefox with the shields up for any website that works well with all the blockers that the browser includes out of the box.

These last two factors will have a dramatic impact on the energy that each of the browser tabs will drain from the battery, and it’s something I recommend: block the advertisement, save battery and reduce your emissions.

Extending the Life of the Battery with the Charge Thresholds

Most consumer laptops will stop charging the battery at 100%, and won’t charge it back unless the battery charge level drops below a slightly smaller percentage, often 96%.

While those thresholds are also the factory configurations of the ThinkPads, these laptops allow the user to establish a different charge thresholds. This is useful for extending the life of the battery as a component; Li-Ion batteries are known to be best preserved when the charge level is between 60% and 80%. Therefore, if you are not going to use the laptop on battery that much, this is a good thing to do.

When you set a different set of thresholds for a ThinkPad, like 60% and 80%:

This is very useful, kind to the battery, and definitely another very nice perk of these laptops.

To do this under Linux, you can manage these values with either TLPUI, or with the tlp configuration file. These files are:

Check your distribution documentation in any other case.

The values you want to uncomment and tweak are the following for the internal battery, BAT0 (BAT1 is a specific external one):

These values can be temporally modified by commands like sudo tlp fullcharge BAT0 or sudo tlp START_CHARGE BAT0 75. If you want the defaults to be restored every time you go on a battery ride, keep going and uncomment the following and set it to 1:

Once you do this, these values will be configured system-wide, at some place external to the OS; I’m not sure if it is the UEFI, the system’s NVRAM or a NVRAM in the battery or in the power subsystem, but they will affect other Operating Systems in the machine.

As for the battery recalibration, in Windows 10 all these changes are done with Lenovo Vantage.